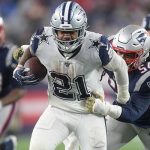 The scorching Dallas Cowboys head to New England on Sunday to take on Bill Belichick’s Patriots in what’s sure to be one of the most entertaining games in NFL Week 6. After a season opening loss to the Tampa Bay Buccaneers, the Cowboys have won four straight. Can Dak Prescott and his mates keep the good times rolling? Or will Mac Jones and the Patriots end the winning streak? Keep reading for NFL odds, analysis, and a free pick for Cowboys versus Patriots. The Kansas City Chiefs head to Landover to face the Washington Football Team in a must win game. KC has lost 3 games this season, which means the Chiefs have lost more games in five weeks than they did all of last season. Versus the WFT, most feel KC gets back to winning football games. But are those feelings accurate? Check out NFL odds, analysis, and a free pick for Kansas City versus Washington.

Why bet on Kansas City versus Washington?

Kansas City quarterback Patrick Mahomes should light up a WFT defense that allows 31 points per. Mahomes struggled in KC’s last game, a loss to the Buffalo Bills. The Bills allow the least amount of points per game on average in the NFL. D.C. ranks thirty-first in points allowed. So Mahomes should have fun on Sunday.

Why bet on Washington versus Kansas City?

Washington does give up a ton of points, but the WFT can score. D.C. dropped 22 onto the Saints in NFL Week 5. New Orleans has one of the best defenses in the league. Kansas City’s defense allows 32.6 points per, which ranks 32-of-32 teams. Washington can outscore KC in this game.

The spread doesn’t make sense. Most believe Kansas City is the better team, but after watching the debacle against Buffalo, it’s hard to say that’s the case.

Patrick Mahomes doesn’t play defense and the Chiefs’ defense is the worst unit in the NFL, which is why any time Mahomes throws an interception or makes a bad play, KC suffers. So far, Mahomes has accounted for 6-of-11 Kansas City turnovers.

By contrast, Washington starting quarterback Tyler Heinicke has thrown just 5 picks. Heinicke and the WFT should score at will, which means there’s a chance KC loses this on the moneyline. Taking the points on D.C. is a no-brainer.

Posted: Thursday, October 14, 2021 4:11, EDT
The Kansas City Chiefs head to Landover to face the Washington Football Team in a must win game. KC has lost 3 games this season, which means the Chiefs have lost more games in five weeks than they did all of last season. Versus the WFT, most feel KC gets back to winning football games. But are those feelings accurate? Read More

Posted: Wednesday, October 13, 2021 6:40, EDT
Even with 5 weeks of the NFL season in the books, it is still to early to be overreacting to specific teams. It is easy to get carried away with a great start, or feel panic set in with a slow start, but history has shown that the good teams have a way of finally getting to where we expect Read More

Posted: Sunday, October 10, 2021 10:10, EDT
The Buffalo Bills lost to the Kansas City Chiefs twice last season, including in the AFC Championship Game, and get a chance for payback on Sunday night in a rematch at Arrowhead Stadium. The Chiefs are short favorites on the NFL odds. Sunday Night Football Week 5 How to Bet Bills at Chiefs NFL Odds & TV Info When: Sunday, Read More

Posted: Friday, October 1, 2021 9:26, EDT
So far, the Kansas City Chiefs have disappointed. The defending AFC Champions have started the season 1-2. The Chiefs hope that playing against the beat up Philadelphia Eagles on Sunday afternoon will get them back on the winning track. Will KC cover the -7 spread? Or can Jalen Hurts and the Eagles keep it close? Keep reading for NFL odds, Read More

Posted: Tuesday, September 28, 2021 2:51, EDT
While it is still much too early in the season to be hitting the panic button, you can bet that there are some fans out there who are more than a little concerned about the current state of their team. This has been a rather odd start to the season, but as we have seen in the past, things do Read More

The Chiefs seem to be on a mission for the Super Bowl this year. The Kansas GM, Brett Veach has a unique look into the NFL Draft and the players he signs on. He’s been in this position for nearly two years and has made some unmistakably bold moves that could very well lead his team to the Super Bowl in 2020.

Kansas has now acquired Frank Clark and Chris Jones, a smart move for the Chiefs. However, in order to find balance with the cost of Clark, Jones, and Mahomes, they must find value and players at a cost-controlled rate. This is a pivotal Draft for young Brett Veach, the real question is, can he and the Kansas City Chiefs continue to grow the depth in their team, which keeping it cost-efficient?

No. 6 Indianapolis eliminated by No. 1 Kansas City | 13 – 31 in Kansas City | MVP front runner Patrick Mahomes and the Chiefs end Indianapolis lucky run and head off to the NFC Championship game next week at Arrow Head Stadium for the first time ever.